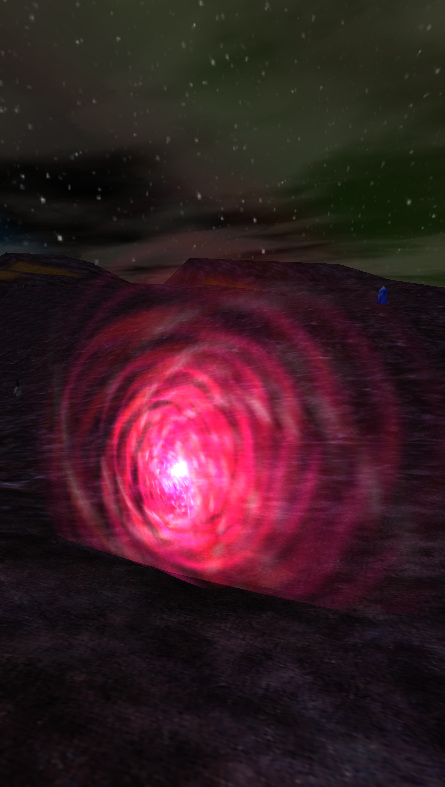 The blade bit deeply into the space between the tusker’s neck and shoulder, releasing a mist of bright, red arterial blood into the opening of Arbrim’s helm. The blood was sour and thick, collecting in viscous droplets as it worked down the contours of his face. As the wails of the tusker weakened to a soft hoot, Arbrim took a moment to shake the foul fluid from his eyes and to catch his breath.

As his sight cleared, Arbrim was once again struck by the familiarity of his surroundings: long stone hallways, broken by large circular and rectangular arenas, overrun by Tusker, Virindi, and Drudge. At one time, countless adventurers had cut their teeth in similar dens outside of Ayan Baqur and Fort Tethana. Such places were now a relic of a time long gone, only visited in the minds of white-haired veterans who gave breath to memory in the taverns and watering holes of Dereth.

Arbrim knew that would soon change. Emboldened by Lord Asheron’s writings of his travel to the alien world of Bur, Arbrim and his brothers, The Hearthseekers, had searched tirelessly for the three ley lines powerful enough to sustain a portal to Ispar. Although the hunt had often gone cold over the preceding nine years, remarkable progress had occurred in just the last three months.

By a stroke of pure luck, a Hearthseeker agent had run across a previously unmarked portal while searching for Virindi artifacts on the edges of the Obsidian Plains. Initial explorations of the den had revealed little out of the ordinary, save for the fact that theolodites kept breaking inside the dungeon. When a field measurement was finally captured from one well-reinforced theolodite, the results were shocking: buried beneath the seemingly mundane dungeon lay the strongest mana field ever recorded. Barely had the celebration begun when the second and third ley lines were discovered.
The past month had been both exhilarating and troubling. After the forward camp in Wai Jhou had been established, Arbrim had personally escorted Ulewinna, a former Arcanum agent and disciple of Ciandra, to the deepest depths of the portal’s den. Arbrim could still smell the heavy scent of ozone that surfaced as Ulewinna drove the mana siphon through the ground and into the ley line.

From that moment on, the den’s inhabitants had grown bolder and stronger. Where previously he could dispatch a dozen of the familiar foes, Arbrim now found himself barely able to handle a single tusker by himself. Fearing the power of these enemies would soon grow insurmountable, Arbrim and the Brothers had agreed that new members would be needed to ensure dominion over the leyline. Platinum inked invitations were subsequently scattered throughout Dereth’s most dangerous territories, ensuring that only the strongest and bravest joined their ranks.

Working his way carefully through the darkened corridor, the mana siphon came into view. Setting down his axe and shield, Arbrim carefully removed the velvet cover from the theodolite Ulewinna had given to him. For each of the last three days, the recordings revealed the leyline to be growing weaker; almost as if there was a bleed that would not clot.
As the malachite tipped instrument began to work, Arbrim felt a tug behind his eyes. Almost immediately, the metallic whisper flooded his brain from all directions, “Are you the cause or the effect, fleshing?” Arbrim spun to meet the voice, but found his gaze met only by the cold stare of stone.

It was not the first time this unseen Virindi had entered Arbrim’s mind unbidden. The message was always the same and never repeated. Turning back to the theolodite, Arbrim sighed at the undulating lines scrawled across the surface of attached vellum. Somehow, the mana field was considerably weaker than it had been the day before; any weaker and Arbrim feared the ley line would become effectively useless to the cause.

Thoughts of how to salvage the dying mana field tumbled uselessly through Arbrim’s mind. When understanding finally struck, it was sharp and surprising. In the emptiness of the corridor, Arbrim whispered, “The body is the workshop atop the ley line…”
Without warning, the Virindi voice returned. This time, however, it was screaming, “You are the cause, fleshling!” 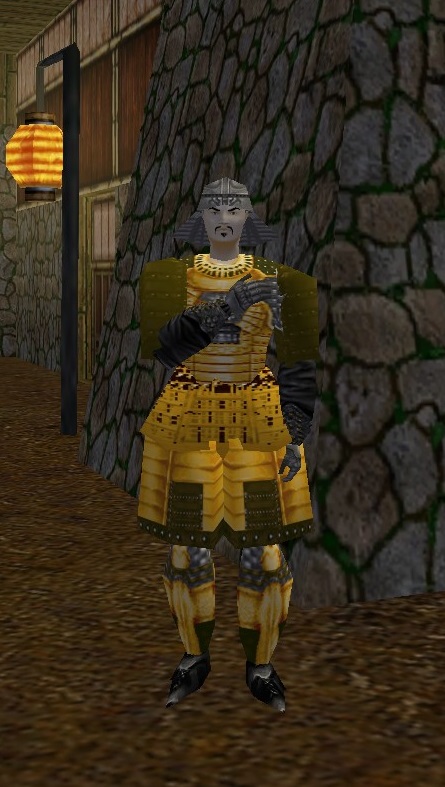 Snowreap, Portal Year 12 – fourteen years before our own time

Sitting alone in the cellar of an abandoned cottage in the Eastham outskirts, Nashar ibn-Azer strained to make out of the forms of two approaching figures. Illuminated by the soft glow of tusker tallow candles and stretched wide across the cobble-stoned walls of the cellar, theirs shapes betrayed neither friend nor foe. The sounds, however, revealed the soft swish of the Explorer Society’s green, linen robe and the harsh clink of plate armor as they raced doggedly to close the gap with their corresponding shadows.

“Perhaps your brother could be persuaded to speak on our behalf with Queen Strathelar? Make sure he reminds the Queen that it was not so long ago that she promised to repay the Society for housing and arming the new arrivals.”

At the sound of that voice, the hairs on the back of Nashar’s neck found their ends. Already unsettled by the summons that had been surreptitiously slipped into his own green robe earlier that day, the unexpected presence of an Explorer Society magistrate did little to quell the host of unbidden images that threatened to overwhelm his tired mind. Thankfully, the panic receded as curiosity emerged to consider the now materializing forms of Lord Mikael Alayne and another, unfamiliar man at the bottom of the nearby, stone stairs.

Hands clasped behind his back, Alayne stopped abruptly as he became aware of Nashar’s presence. Regaining his composure quickly, he spoke sternly, “Do not be so wary, Nashar. I only wish to have an honest conversation with you. Do you believe in the Society’s mission?”

Nashar sighed and shook his head warily. In the silence that hung, Nashar measured Alayne’s companion. The man was remarkably unimpressive, save the shock of auburn hair that fell in curled locks around his shoulders. The man’s armor, on the other hand, was remarkable in all possible ways. Set against brightly polished steel, the striking copper-red veins reminded Nashar of a story he had often heard about the fabled Celdon platemail. Although many Aluvians publicly swore the veining to represent the Canfeld River tributaries that surrounded the town of Celdon, it was also quietly acknowledged that the veins were primarily intended to remind the Knights of Aluvia that the price of battlefield victory was always paid for in blood.

Feeling both sets of eyes now burning into him, Nashar responded calmly, “The answer, I’m afraid, is not so simple. But I am guessing, Lord Alayne, you already know that. Why else would you bring me to a place so far removed from the ears and eyes of those who might find logic in my words? The truth is, I have no problem with the Society’s desire to provide Derethian hearths to Isparian refugees. I myself have worked hard to make that promise a reality. My enthusiasm wanes, however, with the idea that these same refugees must choose to make Dereth their home.”

Alayne shifted his hand to the front of his robes, drawing them down slowly as he worked to smooth some unseen crease in a large, square pocket. “And what about that message do you find so unappealing, Nashar?”
“That it is a lie!”, Nashar shouted, perhaps too loudly. Gathering himself, he continued, “It is like telling a prisoner that he must choose to make his prison cell a home. No man or woman chooses to be in a prison, they are forced there because of their lack of choice. And so it is with Dereth – this place is no more our home than the prison is to the prisoner.”

The Celdon man now spoke, “What would you have the Society do?”
Nashar eyed the bloody veins for a moment, “I would give the people of Ispar a real choice. I would focus the Society’s ample resources on finding safe passage back to Ispar and, once that had been achieved, I would leave it to every man, woman, and child to truly choose…”.

“Let me stop you right there.” Alayne interrupted, “Lord Asheron has already made it very clear that there is not, and there will not be, a return portal to Ispar. And even if there was, what you propose is madness. The roots of our people are cast too deeply in this land. What you propose would threaten to rip allegiances, to rip families to shreds. What would you say to the mother who yearns for Ispar but whose son chooses to stay in Dereth?”
“I would,” Nasher considered, “ask her whether it would be worse if her son was forced to stay in Dereth. Because for many Isparian mothers, that is the reality they live, perhaps unknowingly, every day.”

At this last comment, the Celdon man’s eyebrows raised. Alayne, on the other hand, remained stoic, “Enough of this. I will not have the Society poisoned with these thoughts. I came here hoping that you could be convinced to renounce these fantastical ideas, but clearly you cannot.” Alayne now drew a piece of parchment from his robe’s pocket and dropped it at Nashar’s feet, “You are formally censured and stripped of all rank and title bequeathed by the Explorer Society. From this day forward, Arbrim, let it be well understood that this man’s presence on Society property will be responded to as an act of aggression.”

With that, Alayne swiftly retreated up the cellar stairs. The Celdon man, Arbrim, remained. As Nashar rose to make his own exit, a platemail fist wrapped itself tightly around his wrist. Casting his eyes upward, Nashar found warmth where expected coldness.

“My name is Arbrim the Bold. I am the castellan of Eastham and, more importantly, the son of an Isparian mother who must wail at the thought of her missing children. I promise you, Nashar ibn-Azer, I will do anything in my power to help you find the passage you speak of.”